Save water. Shower with a friend.

Well, my friends, let me introduce you to the "friend" that Kevin has to shower with...

The pix shown are of Kevin & me wearing said "friend." I wanted to let you see how different it looks on two different body types. Yes, Kevin is quite the charmer in his pic.

Kevin came home from the hospital just before Thanksgiving last year. He didn't get clearance to take a shower until mid-December. We had to wait for the "shower talk" from the SUPER VAD team of ladies. I was giving him sponge baths, which if I'm being honest, we both pretty much enjoyed. Hey, we're young, we're hot, why not make the most of a sponge bath when one can?

The first month he was taking showers I had to help him out. He was learning how to live with the LVAD on a daily basis PLUS he still had the wound vac attached to his left arm, that was of no use to him that first month home. Needless to say there were a lot of gadgets to unhook, wounds to wrap up, wires to unscrew, and a learning curve on "how to do this efficiently" for us.

Let this blog entry serve as a reminder of the simple things in life.  The next time you want to just take a "quick" shower... think about how difficult it would be to take a shower with a messenger bag, weighing about 6lbs, hanging off of your body and only have one fully functioning hand.
Posted by Tracy at 11:05 PM 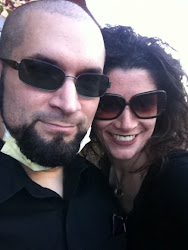